After visiting Black Coffee, I strolled down the street to visit the long-standing “Left Bank Books”. Thanks to a peculiar form of rent control, it was an oasis of bookish calm surrounded by the high-rent tourist destination of the Pike Street Market. 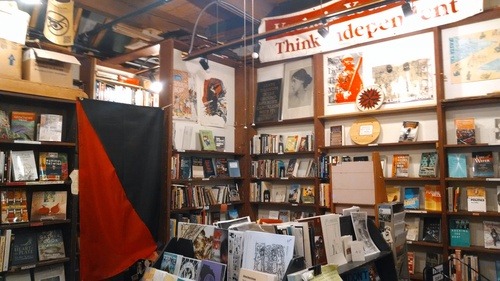 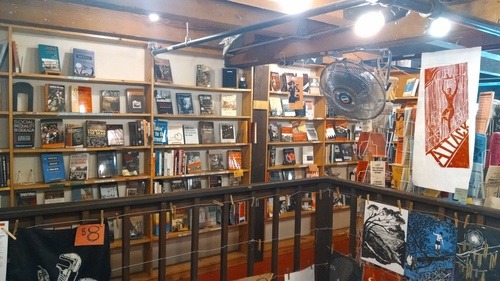 Of course, parts of the market weren’t bad. 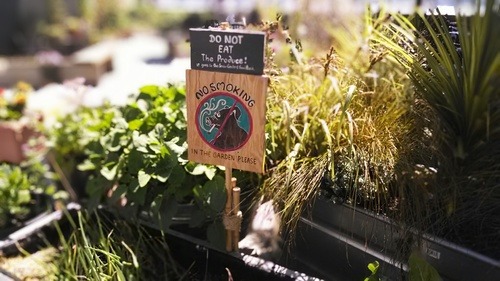 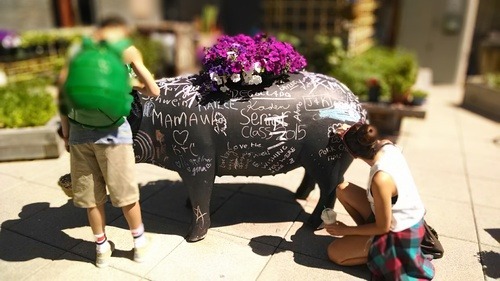 Seattle has its own AT-AT style cranes too: 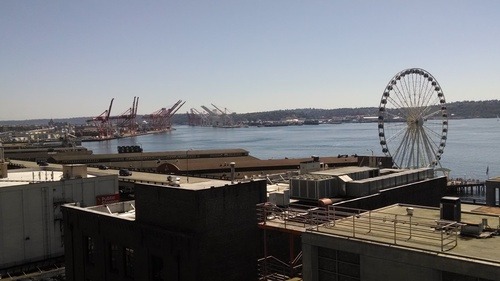 But eventually I had to travel back east to hang out at a(nother) feminist makerspace – the Seattle Attic.

I took to it from the start. Mercedes Lackey is awesome! 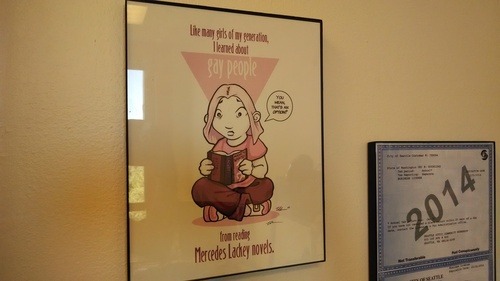 A look into the space: 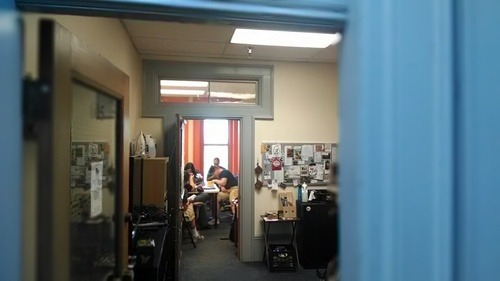 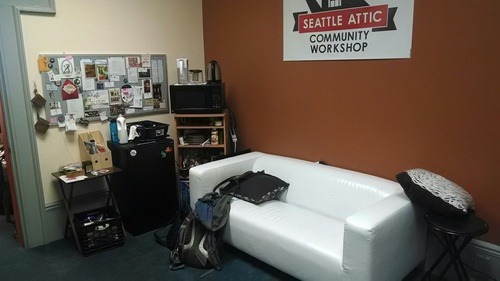 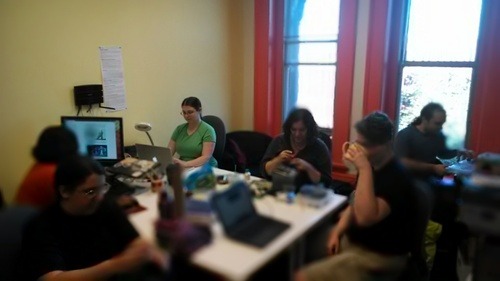 The people here were, with a few exceptions, friendly and forthcoming. They were the sort people I hung out with in late middle school / early high school – earnest. Into knitting and books. Confident in an offbeat way. I felt at home

After the Seattle Attic (which the great Sumana tipped me off to), I headed to another space in Seattle – more of a hackerspace than a makerspace.

This was a quite different space. More men, of course. Seems like everyone there had a connection to Microsoft. A guy was showing off a project he was working on for over a year – a way to use the Kinect API to mix and remix sound instantaneously through hand signals. He called it Holofunk Danceparty. It was awesome.

Two different models: Mercedes Lackey vs Holofunk. Both felt comfortable, in their own way. But neither represents me or my aspirations any more. I still haven’t found a space or community that I’m truly at ease with. Onwards to more searching! 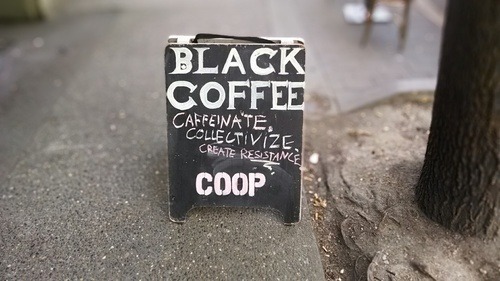 On my second day in Seattle, a friend of mine mentioned “Black Coffee Coop”, so I looked it up. Another anarchist cafe! Cool. I went and checked it out.

The outside has a cool little stand, and also chalkings like this: 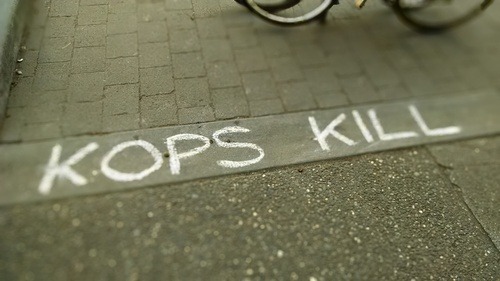 You know how its hard to tell insurrectionary anarchists apart from the houseless sometimes? A dozen people like that were milling outside. The outside also had a great wall of fliers. 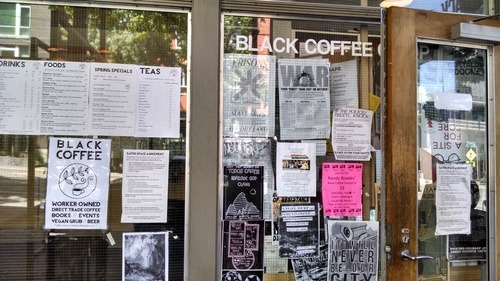 The inside is even cooler, but no one is allowed to be photographed inside. Bookshelves, tons of couches and outlets, an upstairs space. It’s a bustling cafe in the heart of town. Seems like business is going well, though I was talking to a worker-owner there and he admitted that he payed himself almost nothing in order to keep the place running.

You might remember the other color-themed anarchist cafe in the pacific NW – red and black cafe. Turns out that R&B gave Black Coffee a ton of advice when they started out. Cool!

(I’m told there is a big banner from a Rochester group (Metro Justice? Red and Black?) hanging prominently there. I didn’t see it, though I wasn’t looking too hard)

You might remember the other color-themed anarchist cafe in the pacific NW – red and black cafe. Turns out that R&B gave Black Coffee a ton of advice when they started out. Cool!

Even the bathroom was rad. 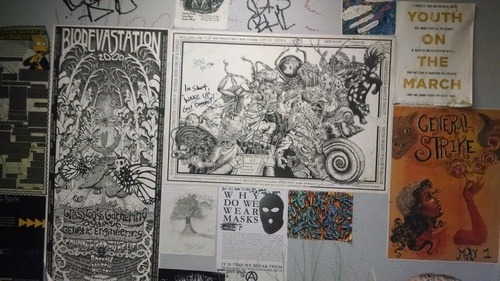 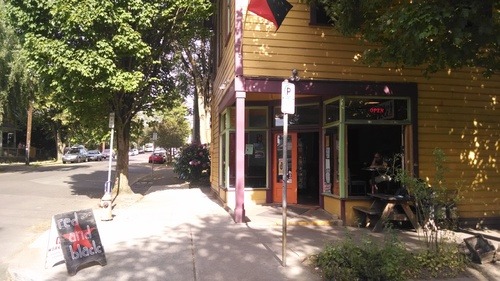 On my first day in Portland, I walked due east, over the river. I was not impressed. There’s a strong “concrete wasteland” vibe right as you cross the river east, and the stores afterwards are often bars or stripclubs. Not my scene.

The first interesting place I found was an art gallery. The curator/worker/person there wasn’t doing much, so we chatted for 45 minutes or so about Portland, life, happiness, etc. I said I might stop by for the 4th of July Barbeque and art show they were going to put on. (Spoiler alert! I did). 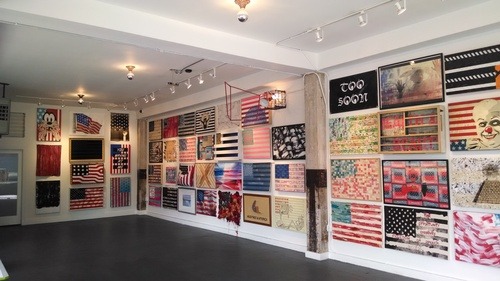 Then ambled south. Being a man who takes my metaphores seriously, I stopped and smelled the flowers that were overflowing from a house’s garden plot.

They smelled heavenly. Amazingly heavenly. So, in full flower bliss, I walked a little further, saw the owner outside on his porch, and said “man, your flowers smell amazing.” “Thanks dude!”

We talked about Portland, community, and life for about 20 minutes before I kept walking. Before I left, though, I took note of something he casually mentioned:

“Yeah, there’s all sorts of interesting places around this area. We’ve got a makerspace just down the block. And an anarchist cafe”

So to the anarchist cafe I went! 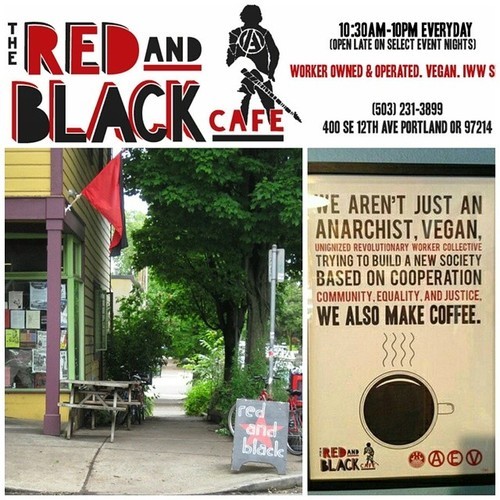 The Cafe is pretty sweet. It’s completely worker-owned AND unionized to boot. (Which seems a bit like overkill, but rad nonetheless). It hosts all sorts of groups in the community. I’ve noticed the unhoused using its wifi, which stays on all day and night and is accessible from the outside. To top it all off, the cafe has legit nice beer and fun names for their food, like the Nihilist Cheesesteak.

As I walked in, I noticed a group of people hanging out in what seemed like a meeting. They didn’t seem to friendly so I went to the counter. After a lovely discussion with the woman working the desk, she introduced me to everyone. They were having a meeting of the local branch of Black Rose – the very same federation that Rochester’s Red and Black is a member of. Small world!

To make it the world even smaller, the people there (who ended up being super friendly) not only knew about Rochester Red and Black, but even knew Colin O’Malley from when he did his nationwide speaking tour.

Turns out that Red and Black also has housing above the cafe, and we all stayed up late into the night talking about the local political scene, radicals-as-subculture vs radicals-as-organizers, history, online organizing, reagan, you name it.

What a fun bunch of people. You should definitely check out R&B if you’re ever in town.